For a long time now, I've been looking a little enviously in the direction of Leica because of the monochrome versions of the M and Q models. There are purely economic reasons why I haven't bought one yet. Or rather, I haven't really been able to explain to my bank account why at least 5,000 euros should flow in the direction of Wetzlar just because of the feeling. So this problem or desire for a monochrome camera must be solved in another way.

But let's start a little further ahead, a little more abstract without getting esoteric. 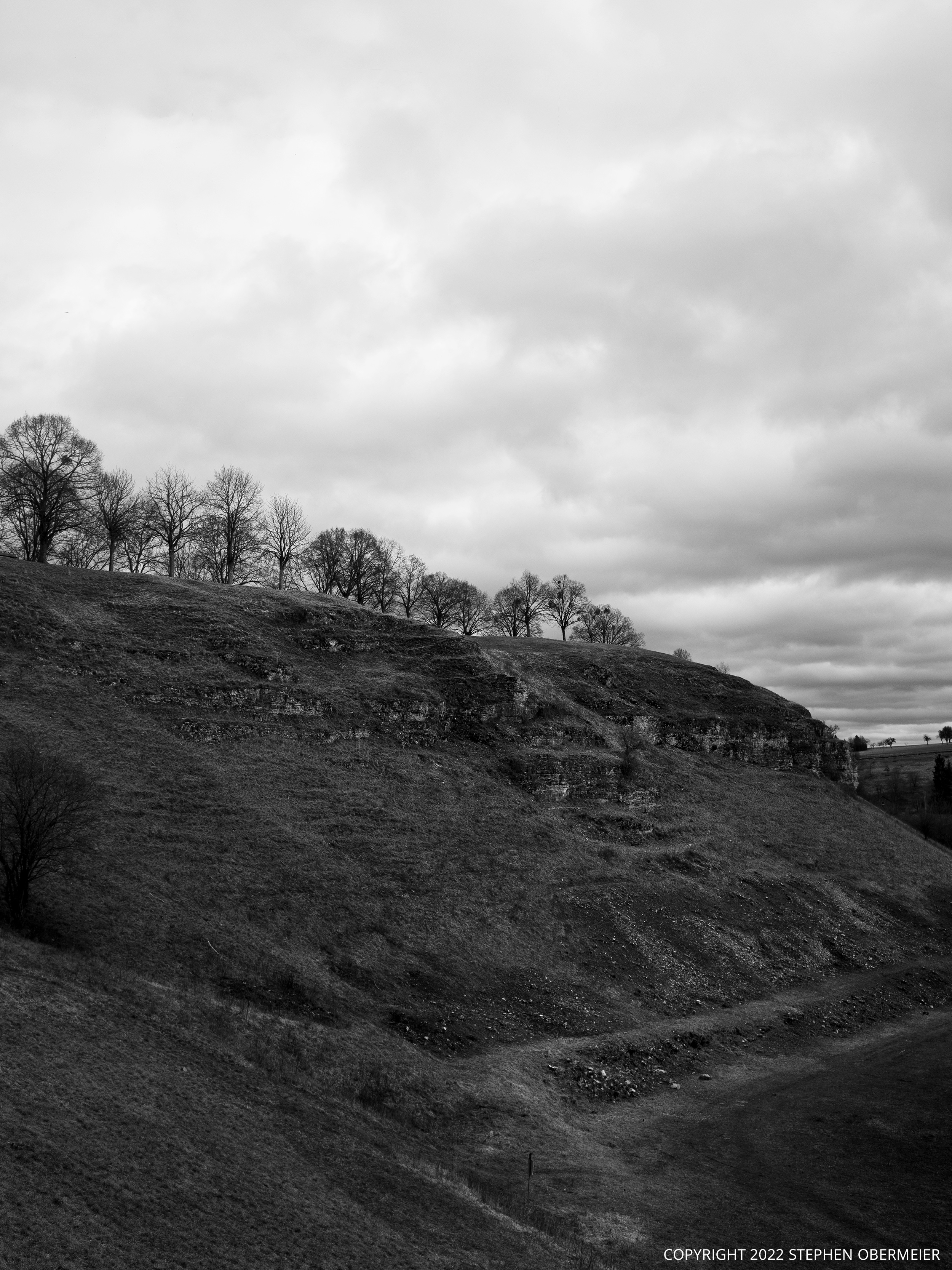 What does it do to you when you take a Polaroid, for example? The attachment to the image is indisputably greater than to any file on a memory card - regardless of whether it is blurred, imprecise, washed-out colours, small format. A Polaroid has a special attraction because of its uniqueness, because it is not arbitrary and our influence on the final result is very limited.

In analogue photography, you decide on a certain type of film. This decision determines the look of the finished picture (let's leave the lab out of this). Whether black and white or colour - there is no way back. Consciously chosen and then having to work with it.

We all know how it works today - it's best to shoot RAW, send it to the image processor and then make the look. The best thing to do is to have VSCO or RNI installed, scroll through the presets and choose one, add a nice curve, and you're done. Super convenient.

That's good for the customer, good for the photographer. All options, always and with all possibilities. The original image is only the first step in a long processing chain. Please don't get me wrong - there's nothing wrong with it and it has often saved our photographers' asses that it is possible to adjust everything again at any time. 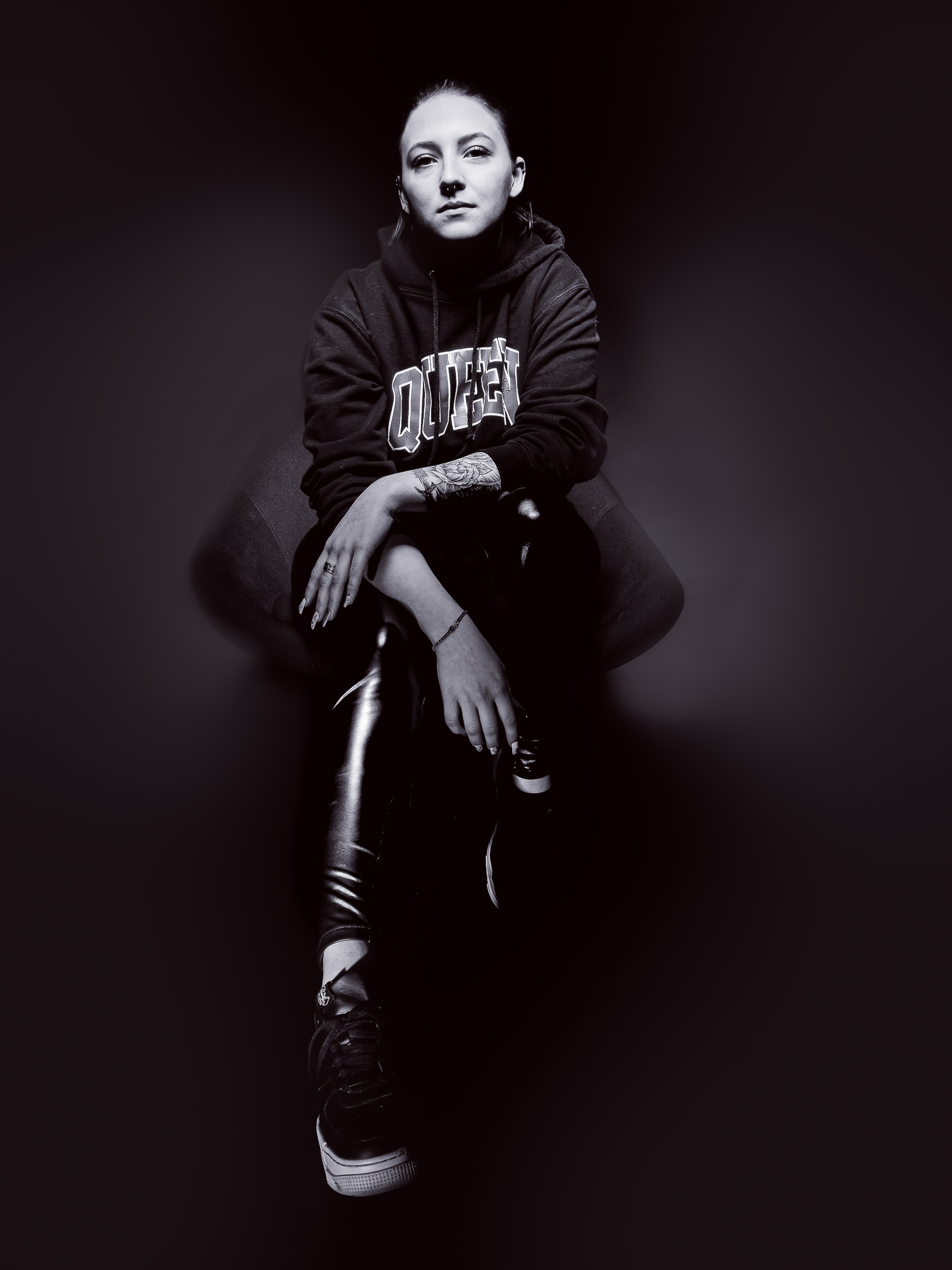 Photography as an art form

Leaving the commercial aspect of photography, I speak as one who loves photography as an art form and question how good all the achievements are for the feeling in photography. I think it is necessary to photograph with a visual idea and not just drift blindly.

It's about making conscious decisions. Once you've made those decisions, it's much easier to come up with images because you're not constantly tweaking all the parameters. And if these decisions are irrevocable, a creative process is started rather than prevented.

With the monochrome Leicas, the decision whether to use colour or black and white has already been made. Baked in silicone, irrevocable. HP5 or TRI-X forever! The high price of the Leicas also makes the decision even more irrevocable. 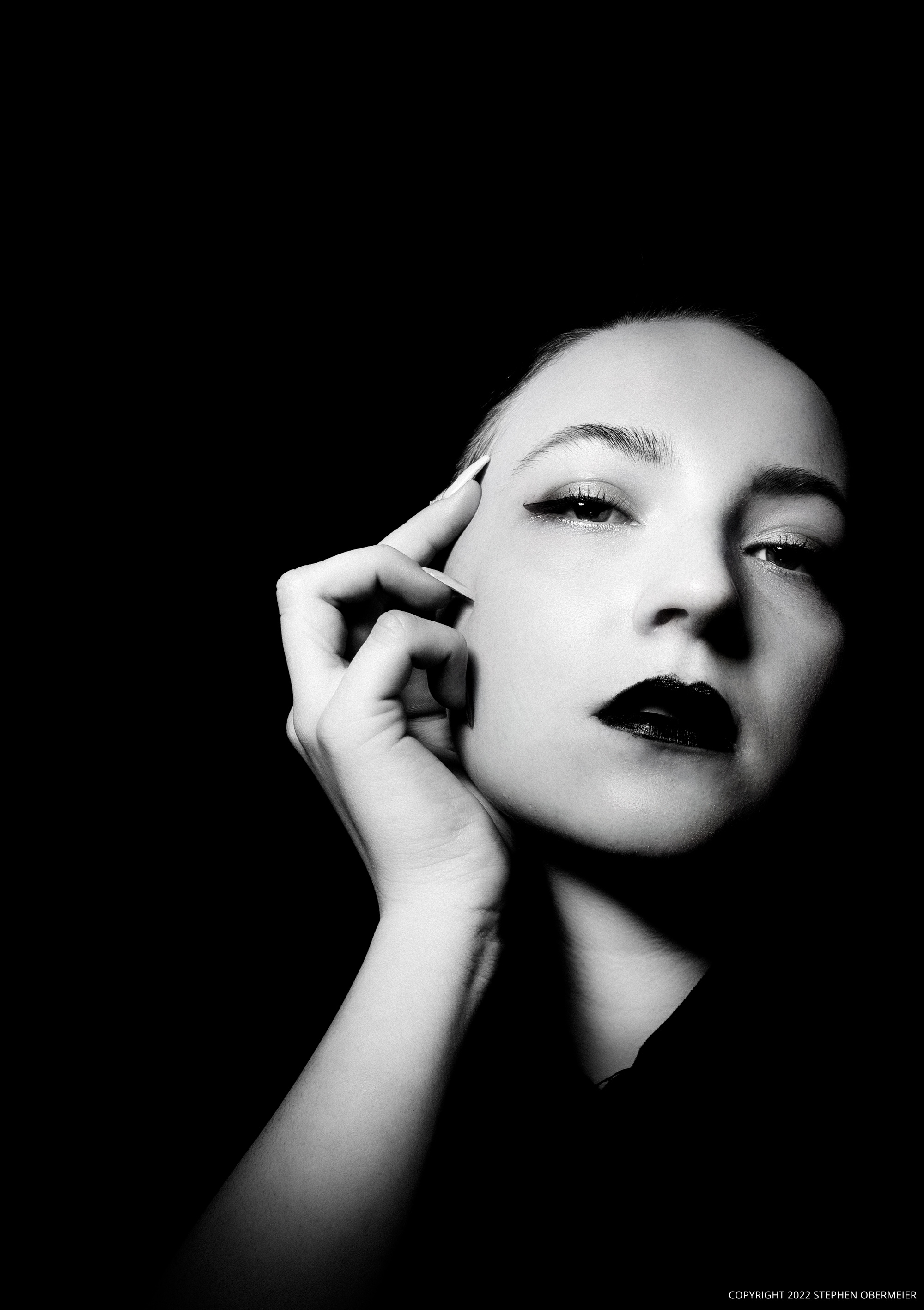 Back to the RICOH GR

I've had a GR II for a long time. It's always in the car, fits in any pocket and you can take good pictures quickly. Many street photographers love it because it's practically invisible. A few years ago I thought how cool a monochrome GR would be and that it would sell like hot cakes. I have loose contacts at Ricoh/Pentax and brought the idea to the table in more than one conversation with staff. The idea was not new, of course, and I was certainly not the only one who had the idea of a monochrome GR. The problem at the time was that monochrome chips were not available in large-scale production - whether they exist today I don't know. In any case, I put the idea of a monochrome GR to one side for the time being. 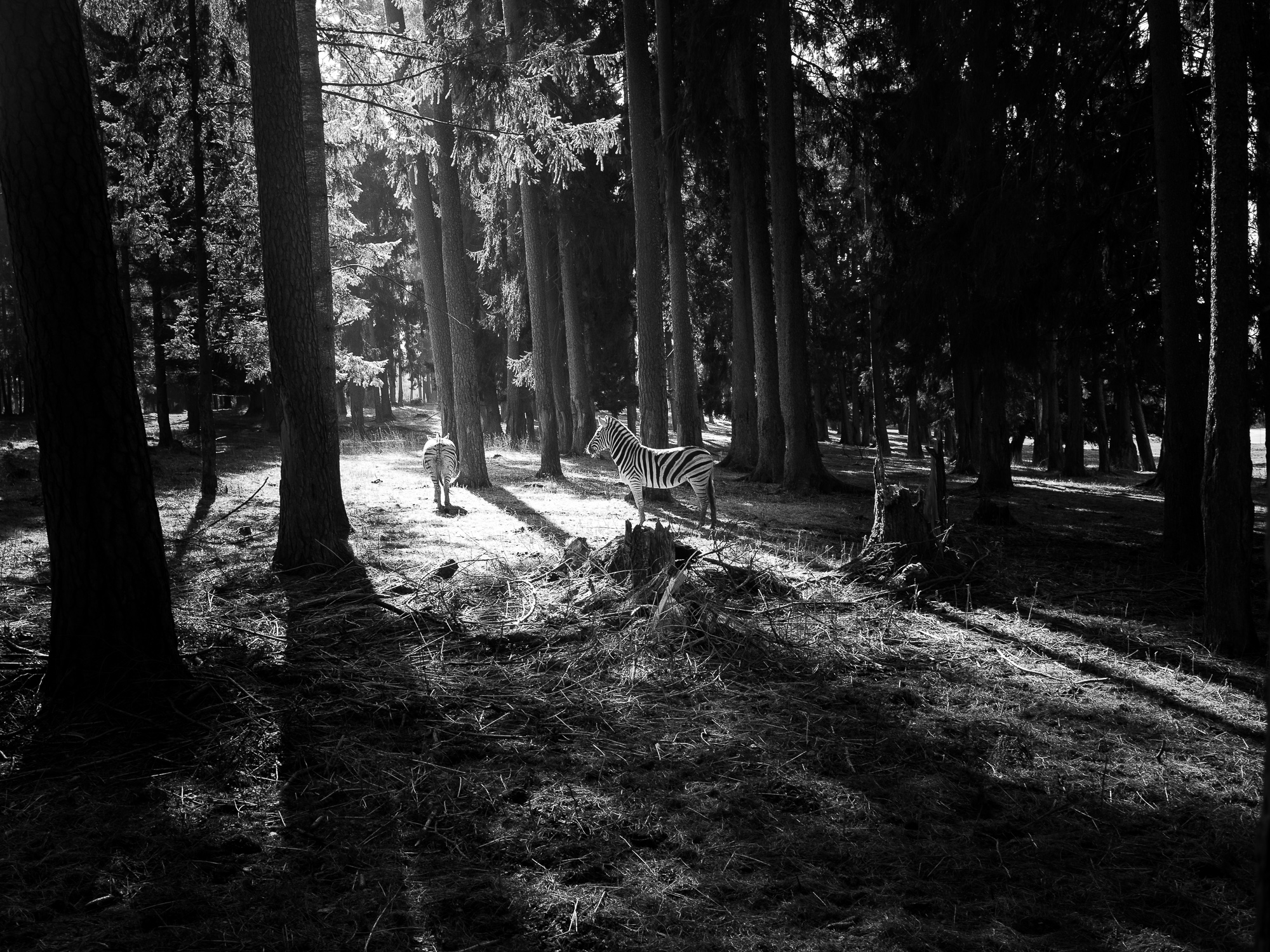 Time went by and a friend of mine started debayering cameras in a process he had developed himself  (Debayering Demystified by Craig Stark). The microlenses on the camera sensors are removed and the camera is no longer able to see colours. I quickly became aware of this and the monochrome GR was immediately present again. I asked him if he could convert my GR II. He was unsure at first, but then ventured into the project. The camera was sent by courier to Lithuania and after 2 weeks I had it back. The operation was successful and I think that my GR may now be the only or one of very, very few true monochrome GR cameras.

The result is absolutely convincing, and before we get to the technical aspects, we come to the emotional ones - the "feeling". My GR is now what is certainly close to the minimum that a camera has nowadays in terms of equipment. A fixed 18 mm lens with an APS-C format sensor. No colour, no image styles. It is precisely this reduction that makes it so valuable to me. The decision which "film" and which lens are irreversibly made. Welcome creativity!

The technique (no deep dive)

From a technical point of view, the elimination of the microlenses increases the resolving power of the sensor. In numbers, the difference is about the same as when you compare a Pentax K1 with and without PixelShift. You get, so to speak, a pixel shift shot with only one instead of 4 exposures, which are offset against each other. The lens of the GR easily resolves this.

The camera sees more light than before. However, when calculating the exposure, the camera still uses the values with which it set the exposure as a colour camera. This means that it now tends to underexpose. Depending on the situation, you have to intervene more or less with the exposure compensation.

The colour noise is completely absent, how could it be present if the camera no longer sees any colour. The luminance noise is very organic, almost film-like. Something I already liked in the monochrome Leicas. You can use it deliberately as a stylistic device. Sure, details are lost, but you can shoot with the GR with a clear conscience at the maximum ISO setting of 25,000 and not have an ant race at night on the memory card. 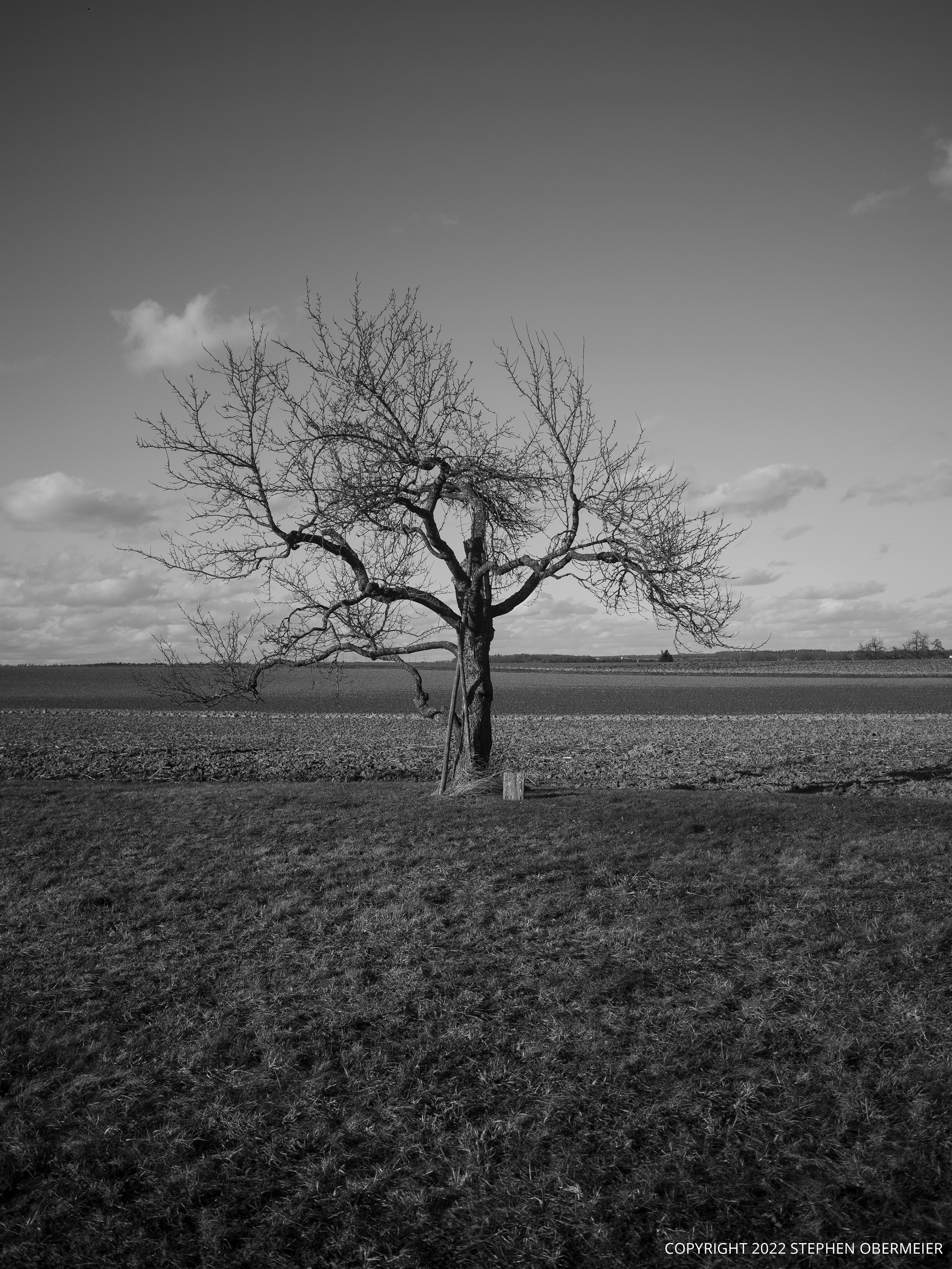 To get the most out of the files, you should always shoot RAW. Afterwards it is recommended to convert the files with monochrome2DNG. Although the images from the GR are monochrome, the camera doesn't know this and neither does Lightroom and starts the debayering process during import. This no longer happens with the converted DNG files. If you take pictures in JPG format, you should also set the camera software to black and white, otherwise the pictures will be coloured depending on the selected white temperature. The JPG format is not recommended, however, because practically all the advantages in terms of image quality are lost through JPG compression and the camera always performs debayering. 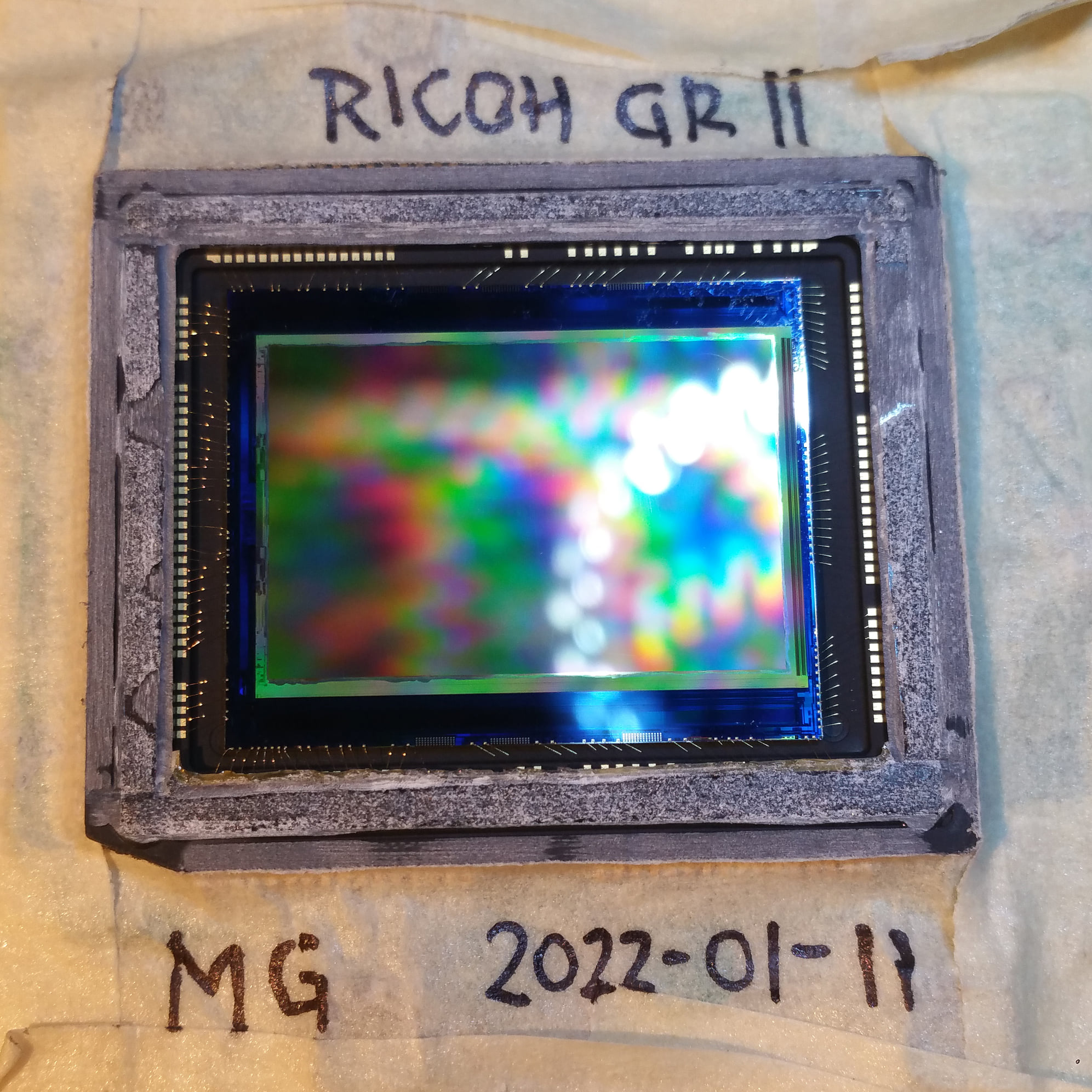 My GR Sensor after the treatment.

The monochrome conversion has breathed new life into my old GR. It's fantastic to be out and about with and the maximum reduction makes it more valuable to me than it ever was before. Personally, I found the GR conversion much more appealing than a K1 or any other camera with interchangeable lenses. The concept works 100% for me and I am convinced that a GRm would certainly find many friends. Go for it Ricoh!

You want a GRm?

Here you can find a lot of demo images, also in DNG format, to get an idea of the output of my custom GRm.
GOOGLE DRIVE LINK